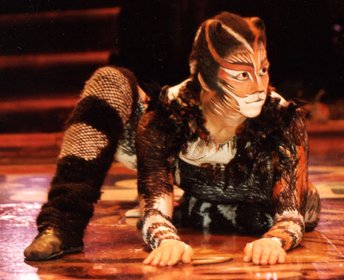 Tommi originally trained at the Royal Swedish Ballet School and worked as a performer in dance and music theatre for over 20 years internationally and in London’s West End.

By the later half of his career, he developed a passion for the art of massage, in particular sports massage and its health benefits; and he also qualified as a Pilates instructor. It was this interest in integrating therapies which led him to later train as an Osteopath at the British School of Osteopathy, graduating in 2009.

In 2013, he officially graduated from University College London as one of the first students with the new M.Sc degree in Performing Arts Medicine, the first course of its kind in the world, focusing on the specific issues concerning actors, singers, dancers, instrumentalists and other performers.

Areas of special interest include breathing and voice. His M.Sc research project involved a previously untested and researched area: breathing whilst singing and dancing simultaneously, testing West End Musical theatre performers as they performed extracts from their shows.

Tommis M.Sc research project, subsequently published in a medical journal, have been presented at ASPAH (The Australian Society for Performing Arts Healthcare) 2015 symposium in Sydney; and at ISPS 2017-International Symposium on Performance Science, in Reykjavik, as well as training days for the British Voice Association, 2018; The British Association for Performing Arts Medicine, 2017 and for the M.Sc students at UCL in 2017.

The project involved a previously untested and researched area: breathing whilst singing and dancing simultaneously, testing West End Musical theatre performers as they performed extracts from their shows.

Full paper can be retrieved from Journal of Voce web site jvoice.org.

An evaluation of the breathing strategies and maximum phonation time in musical theatre performers during controlled performance tasks.

This unique study measures how exertion from dancing affects MPT in healthy subjects and, uniquely, testing breathing during simultaneous singing and dancing.

Main aim was to find a method allowing investigation of the effects upon the respiratory system of various effortful tasks associated with musical theatre performance.

Using a telemetric heart rate monitor, mask and gas analyser; 20 professional West End musical performers were tested whilst performing a 3 min piece from their respective shows (Singin’ in the rain; Top Hat and Wicked), in which both singing and dancing were required continuously; repeated in three ways: singing (1) and dancing (2) separately, and combined singing and dancing (3). In addition, measurements were taken of MPT and Heart rate, standing still at rest (a), and directly after each performance task (b); and Vital Capacity, at the beginning and at the end of the session.